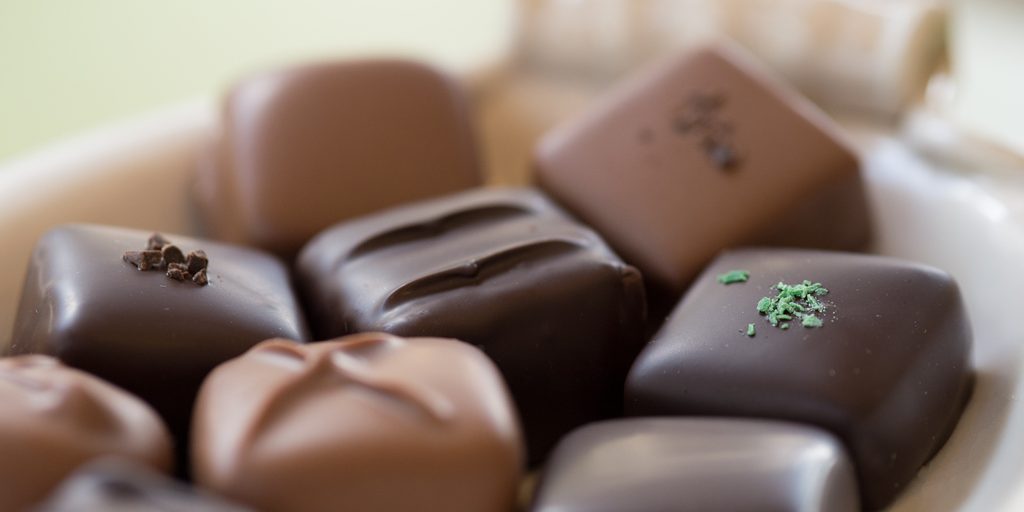 What is the History of Chocolate and Valentine’s Day?

How familiar are you with the origins of the sweet tradition of giving chocolates to loved ones during Valentine’s Day?

While it’s hard to trace back to one true beginning, we were able to uncover some interesting history around this holiday. We also interviewed the owners of Lula’s Chocolates, which is our own piece of chocolate history right here in Carmel!

The History of Valentine’s Day

The roots of Valentine’s Day are fuzzy. A famous legend suggests that St. Valentine, a priest with empathy for romantics, performed illegal marriages for soldiers and that the holiday was named after his actions.

There’s a lack of proof for this legend, though. There are, however, two Roman saints both named Valentine. Neither of these saints has an association with romantic love, so it’s hard to tie them to anything more than the name.

The History of Chocolate

Chocolate has been popular throughout history, even if it didn’t always exist in the form we think of today.

For instance, during the Mayan civilization, families enjoyed drinking hot chocolate-like drinks with every meal. During the Aztec civilization, cacao beans were treated as currency. In France, during the time of Marie Antoinette, the women were known to mix chocolate with amber to tempt lovers (but we don’t recommend trying that now!).

The concept of sweet chocolate came with the blending of South American and European cultures. Cacao beans are quite bitter, so commercializing them with readily available sugar is where chocolates started to resemble the treats we love now.

After taking over the family chocolate business in the 1860s, Richard Cadbury was looking to spike sales. They’d already created highly popular drinking chocolate, but that process made a lot of excess cocoa butter. He didn’t want that chocolate to go to waste, but it couldn’t be used for drinking. The solution was to create “eating chocolates,” which is how Cadbury initially referred to them.

Cadbury’s chocolates were, no doubt, delicious, and eventually became a true symbol of romance. This persisted until the World Wars when sugar rationing caused Valentine’s Day traditions to scale back dramatically.

Care for a Kiss?

ilton Hershey. Not everyone knows this, but the chocolate guru began with making caramels.

In 1894, Hershey made a slight adjustment to his process: he covered those caramels with sweet chocolate.

The industrialization of these candies led to the famous Hershey’s Kiss. When producing these tear-drop shaped chocolates, the equipment made an odd smooching noise. This produced the name of the “Hershey’s Kiss.”

Of course, there’s been quite the change since the introduction of this iconic treat. Did you know that Hershey’s Kisses were initially marketed as a nourishing, healthy part of a balanced diet? We say any excuse to eat more chocolate is a good one! 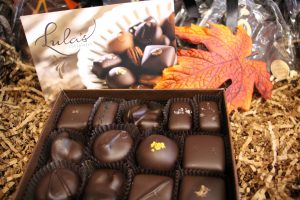 What is the History of Lula’s Chocolates?

If you’re really looking to impress your sweetheart, Lula’s Chocolates is the place to find your Valentine’s Day treats in Carmel, California.

Over a century of love goes into this cherished brand

. Namesake Lula was born in Wyoming. Her home economics teacher lived at her family’s home and ended up teaching young Lula to make candies.

After Lula got married and moved to Salt Lake

City, she made chocolates from home and sold them to her friends and family. At the time, she called them “Mrs. Lund’s Personality Chocolates” and she kept it up for thirty years!

Even after she officially retired, Lula continued to make chocolates as a labor of love. As she aged, though, dealing with the heavy equipment became more challenging. Her grandson, Scott, came over to help her out.

The more he helped, the more he learned. When Lula passed away, Scott took up the family torch and started making chocolates himself.

Scott’s big break came when the Winter Olympic Games were held in Salt Lake City in 2002. A friend in government asked him to make some chocolates for a few ceremonial events. They were so successful that Scott turned these chocolates into his business.

In 2004, Scott moved to Carmel, California, and to honor his grandmother, he ended up calling his business Lula’s Chocolates. That’s how they got to where they are today!

Victoria Lund, Scott’s daughter, is also helping keep the family tradition alive. She is currently very involved in the business and we recently had the pleasure of speaking with her about chocolates and Lula.

Check out our interview:

Why do you think people gift chocolates and sweets for Valentine’s Day?

People like to show love by giving things that bring joy and comfort. I think with Lula’s [Chocolates] being such a fresh product, people often say they can “feel the love in Lula’s,” so it really does make the perfect gift!

I spent my middle school years living in Carmel, and every summer we would travel to GG’s (Grandma Lund’s) house. My family would spend two weeks helping her fix up her house – painting, yard work, fixing things. It seemed I always pulled the weeds in her rose garden and painted the fence. We would also play hide and seek with our cousins in her basement. That’s where the candy kitchen was located. I loved the Mint Cream in Dark Chocolate and I can remember her pulling the box down and giving me one. She would tell us grandkids, “Be true to your teeth or they’ll be false to you.” I always cried as we backed out of the driveway to go back home. I loved her very much!

What are some of the original confectionary items from Lula that you still offer?

What is your favorite confectionary item currently available in your store?

I love our Petite Truffle. [It’s] dark chocolate perfection.  It’s what I’ll grab because it’s bite-size and so rich and decadent.

No matter how you plan to celebrate Valentine’s Day this year, honor the history of chocolate and treat yourself with something sweet from Lula’s Chocolates.